Building pipeline coverage is a mistake….’qualifying out’ is what increases productivity.

Since the earliest incarnations of B2B sales models (dating back to the 1880’s), sales people have been trained constantly on the importance of qualifying the prospective customer to ensure complete and full understanding of the customer needs or pain points. Success and failure in sales nearly always hinges on the sales person’s ability to sift out the tyre kickers from the genuine buyers narrowing the focus, and increasing the chances of conversion. However, most of the generally accepted practices around sales qualifying that I have used throughout my career are now increasingly out of step with the modern buying journey.

In today’s business context of mature markets, educated customers and high levels of (global) competition, where the vast majority of buyers are now aiming to reduce the number of vendors they engage with, effective sales people are now required to become much more strategic and selective about where, and in what quantity, they commit company resource to pursuing new business opportunities. Being called into a sales opportunity late nearly always suggests that you are simply being used as ‘column fodder’. 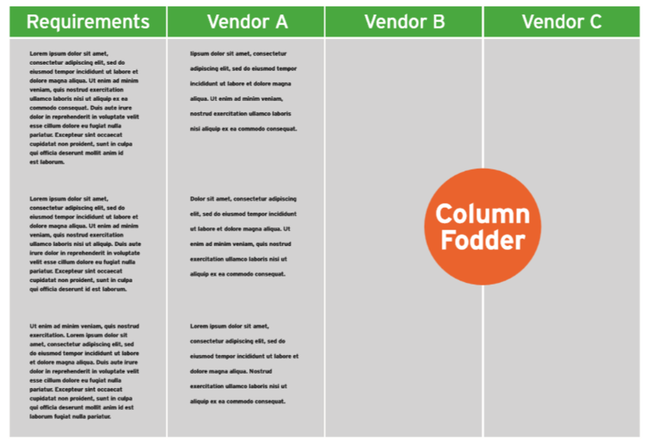 ‘Qualifying Out’ should now be the priority:

Walking away from a potential sales opportunity is a difficult thing for most sales people to do because sales people are by their very nature highly optimistic animals (wishful thinkers)…always believing that they can win the deal. Qualifying out also runs counter to the conventional (and now outdated) wisdom that emphasises building ‘pipeline coverage’ as the number one priority. This stems from the old “sales is a numbers game” logic that no longer holds true. Old school sales people that continue to manage their territories through the lens of the proverbial rose coloured glasses are a real danger to most businesses. If any other business department gambled company resource so recklessly there would be consequences, and yet unwitting sales people can cost their companies significant sums of money when they fail to properly qualify the aforementioned ‘column fodder’ scenarios.

To address this issues, in my last role, my team and I implemented a very simple system that rapidly translated to an important increase in our ‘conversation ratio’. In short, we conducted some detailed analysis into our historical sales data, and we questioned some of the long held beliefs and metrics around pipeline management. Through some careful analysis we quickly learned that out of every 10 live opportunities that had progressed to “proposal stage” (60% probability) we were converting, on average, 3 of these 10 into closed sales resulting in revenue for the business. That is, 30% conversion or winrate from “proposal stage” which is actually high, but then we were the market leader in our space at that time. In search of an uplift in conversion, we then decided to trial a new approach that would mean each sales person would have to become even more uncompromising and almost brutal about the way that they were qualifying opportunities which in many cases meant qualifying out from any sales opportunities where we believed that we were being used as ‘column fodder’. We began approaching qualifying from the opposite direction – by providing small incentives (or rewards/spiffs) to sales people to ‘qualify out’ of an opportunity rather than clinging desperately to a ‘stuck’ sale that in reality was never going to close. This pipeline cleansing can be scary for most sales leaders because we are all taught that you must have at least 2-5 times quota in your pipeline to be successful, and this is really yet another anachronism that in my opinion, has no place in modern sales planning.

Allow let me explain why: as mentioned earlier, my team and I had a conversion rate of circa 30% meaning that out of every 10 opportunities that had progressed through to Sales Stage 5 (Proposal) in our Forecast, we were converting only 3. By taking the focus away from pipeline coverage, and by implementing some increased rigor around ‘qualifying out’ we were able to change some entrenched behaviour’s and reduce the 10 opportunities in Proposal Stage down to 7 whilst still converting 3 as closed sales. In other words, we began focusing on ‘qualifying out’ of any opportunities that were ‘stuck deals’ or where we believed that we were being used as ‘column fodder’. The result here was that instead of closing 3 out of 10 opportunities we were now in effect closing 3 out of 7. This translated into an instant increase from 30% to 42% in conversion rate, not to mention the HUGE opportunity cost that we had just removed. This uplift in conversion rate, and clearer focus on qualifying in general created a significant productivity improvement which flowed through to our bottom-line, and the truth is that this was a simple and easy to implement transformation that provided our business with a quick win.

Of course, ‘qualifying out’ is also a great opportunity to test how your prospective customer views you as a potential supplier. The ancillary benefit being that customers will often respect you more for being an astute business professional when you politely explain why you are not bidding, and I have personally been involved in numerous scenarios where a customer has come back (cap in hand) to the vendor that withdraws their bid. Try it with those stuck deals, and redirect your resources onto deals that can actually be converted – you might be surprised what happens.

Narrowing your focus (and company resources) on deals that you CAN actually win is increasingly critical to future business success.